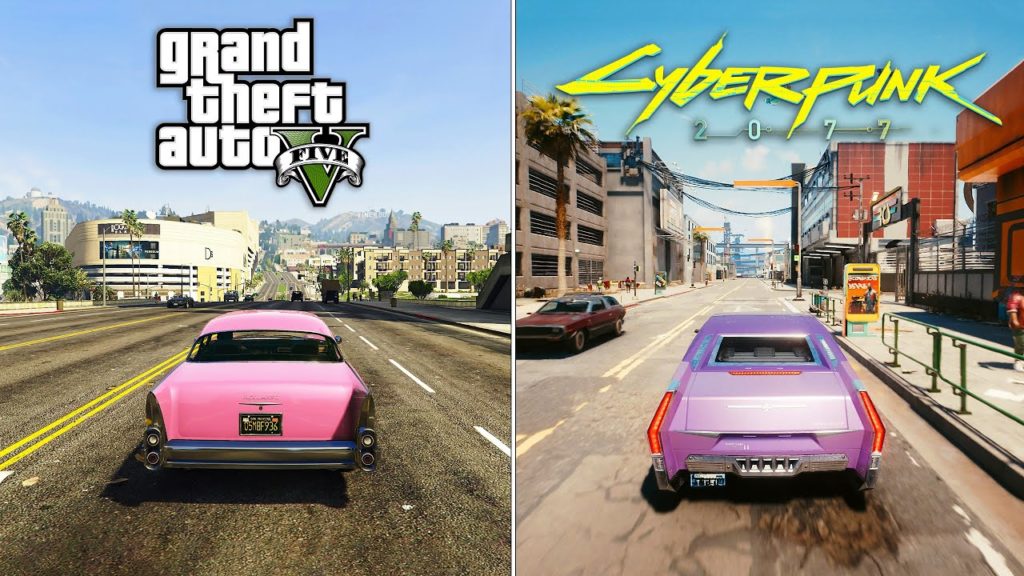 It seems no other video game comes close to the hype that preceded Cyberpunk 2077. For a community that’s almost notorious for its impatience for delays, 8 years of wait seems nothing less than a miracle. Multiple delays, a turbulent development cycle, change of genre midst development, and the need to create cross-generational compatibility for consoles were just some of the problems that CD Projekt Red had to overcome. All of that has culminated in the eventual release of the game on 10th December 2020.

The reviews for the game have been mixed. The highlight of the criticisms leveled at it has been how poorly the game performs on the PS4 and Xbox One consoles. You can read more about this here. Apart from this, the gaming community has been quick to compare Cyberpunk 2077 to another game that had a similar pattern of hype before its release; Grand Theft Auto V. So, which of the two is better? How do they compare in terms of gameplay? In terms of theatricality? And perhaps most importantly, which game has the better open-world setting to offer? Find out in this Cyberpunk 2077 vs. GTA V comparison:

This is undoubtedly the most interesting comparison between the two games. It is probably the one theme that ties both games together more than anything else. Surprisingly, upon closer look, it becomes clear just how vastly different the two games are in their approach to creating an open world. Before I go any further, I should add that GTA V was released back in 2013. It has had 7 years to add enormously to its open-world. A player who played the game in 2013 and never played it again would be astonished to see how different Los Santos looks now than its initial release. Hence, in the interest of fairness, I’ll only compare what GTA V had to offer upon its release without taking the subsequent additions into account.

Firstly, since Cyberpunk 2077 is a futuristic game, there’s a lot more room for creativity. That’s not an indictment of Rockstar’s pièce de resistance in GTA V. Still, a futuristic dystopia set in cyberpunk theme makes up for a more exciting setting than a satirical take on modern-Los Angeles (in my opinion). That being said, GTA has a definitive edge over Cyberpunk 2077 when it comes to creating a cinematic narrative. Since you’re playing as multiple protagonists, the immersive GTA V map feels like a unique character in itself. GTA V‘s storyline could easily be made into a TV show without any changes since the vast open-world is an essential theme throughout the game.

On the other hand, Cyberpunk 2077 embraces its role-playing game (RPG) moniker. Like The Witcher or Skyrim, the world is a lot smaller and compact compared to GTA V, but by design. Every street corner, every underground tunnel, every NPC, every car, even a random building has something to offer. Both in terms of narrative and gameplay.

In other words, GTA V creates almost like a massive playground. The gameplay and storylines alter depending on how you interact with the world around you. Conversely, Cyberpunk 2077 has no interest in creating a massive world, rather a denser one. However, unlike GTA V, a lot more attention is paid to the little details making it feel just as intriguing as anything GTA V has to offer.

It is at this point that the parallels between GTA V and Cyberpunk 2077 come to an end. In Los Santos, Rockstar created one of the most accurate portrayals of real-life in a videogame. The locations are real, the setting is natural, and the satire builds on those elements. The ultimate aim is to make a mockery of modern media and pop culture. Perhaps intentionally, it adds the black comedy aspect to everything that happens within the game from start to finish.

Cyberpunk 2077 has no time for real-life settings. Instead, it drops players right in the middle of Night City, a dystopian future where you’re only a criminal if you get caught. In other words, players have an unprecedented amount of freedom when it comes to their actions.

Both GTA V and Cyberpunk 2077 have taken a completely different approach to how the game “feels.” Despite its real-life setting, it becomes apparent within 15 minutes of gameplay that GTA V positions itself as a game that mockingly presents real-life situations. Cyberpunk 2077, owing to its futuristic setting, offers a horrifying image of what lies ahead for us and what is to become of this world.

There’s a lot more you can compare between the two games, but the fundamental differences end here. Different weapons, vehicles, activities, and, yes, different characterization options are different. But all of those are regular differences between games released 7 years apart.

In the end, it boils down to what kind of a game you prefer, and for now, at least, what console you have. For the latter, if you have a PS4 or Xbox One, GTA V is a clear winner. Cyberpunk 2077 has been plagued with bugs and crashes on its console versions. It has promised to released 2 new patches in January but confessing; it won’t add anything to the gameplay or how the game looks.

As far as which game is better, that depends on what kind of game you prefer. For those that have the adventurer’s soul and new locations, stories, and activities consistently, GTA V is miles ahead. Similarly, for those that cannot live without being surprised repeatedly by what the game has to offer in terms of gameplay when replaying the same activities and missions, Cyberpunk 2077 is the winner. Either way, both are extraordinary titles that’ll keep you entertained for days on end.